The automated data-generation tool is available online and provides comprehensive country snapshots of the context in which female entrepreneurs and workers operate. At the click of a button, the tool generates country-level information across some 125 indicators, organized by the toolkit’s topics: access to finance; access to markets; business climate; legal and regulatory framework; social norms; training, skills, and information; and technology. Sources for all indicators are referenced in the online automated data generation tool.

The sheer amount of data generated by the tool can be daunting at first glance. This guide is intended to help users assemble an overall picture that can then be developed in more detail, either from additional analysis of the data from the automated tool or by adding other sources, such as national gender reports.

Begin by looking at indicators for the country, keeping in mind the following topical areas: employment, education, family and physical sovereignty, financial participation, access to capital, business environment, and entrepreneurship for women. Within each of these groupings, you should analyze the indicators to get a sense of women’s status in that domain. Then compare the country’s data with some point of reference, such as figures for the region or for other countries at the same income level. 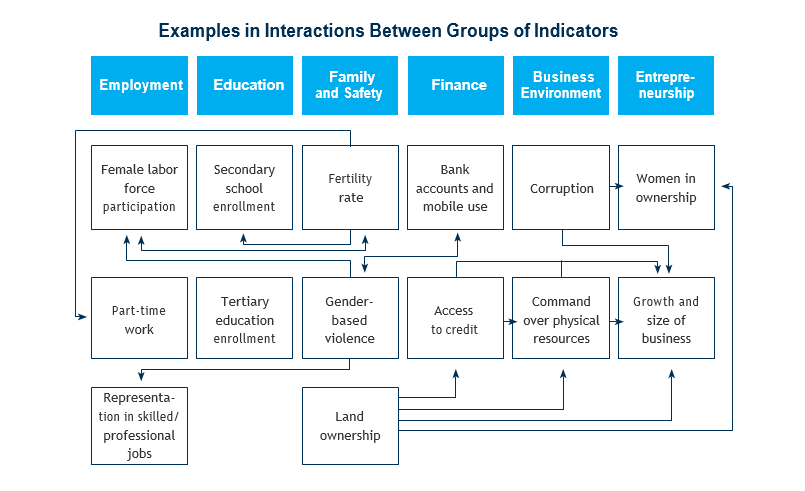 As a rule of thumb, countries with a high level of gender equality, in addition to having high incomes, also tend to have high levels of female labor force participation, gender parity at all levels of schooling, replacement-level or lower fertility rates (2.1 or less), and more gender-equal bank and technology use. In contrast, countries with low levels of gender equality generally have low levels of female labor force participation, large gender gaps in education, high fertility rates (4+), and low technology and banking participation by women.

Legal provisions, also indicators in the toolkit, must be used carefully. Most nations have enacted the kinds of legislation believed to encourage gender equality, but many do not enforce the laws. Do pay attention to laws on the book versus implementation reality.

A similar caution applies to measures of the business environment that are not disaggregated by sex. These numbers can be misleading because men and women have different experiences in business. These measures can be used to gauge the country’s commitment to growth, especially through entrepreneurship, but should not be applied uncritically to women. Take care to look at both the percentage and the female/male ratio on measures where sex disaggregation is available. A very skewed ratio is often attributable to low base numbers for both sexes, such as in bank account ownership in poor countries.

After the indicators under each topic have been analyzed, comparisons should then be made across each group. Invariably, some parts of the data will seem to contradict or raise questions about others. At that point, it may be useful to look for additional contextual information to help round out the picture.